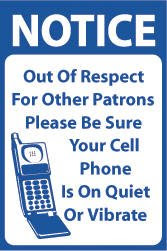 It was bound to happen eventually.    We’ll let Gothamist tell you the story of National Review writer Kevin Williamson‘s night at Natasha, Pierre, and the Great Comet of 1812:

During intermission, Williamson’s date complained to the theater’s management, but he says he didn’t personally witness the theater managers admonish the disruptive audience members. And once the performance resumed, the woman sitting to Williamson’s right on his bench would not, he says, stop using her cell phone. “It looked like she was Googling or something,” Williamson tells us. “So I leaned over and told her it was distracting and told her to put it away. She responded, ‘So don’t look.’ “

Blood boiling, Williamson says he then asked her, sarcastically, “whether there had been a special exemption for her about not using her phone during the play. She told me to mind my own business, and so I took the phone out of her hands. I meant to throw it out the side door, but it hit some curtains instead. I guess my aim’s not as good as it should be.”

The rude patron (the woman) may be pressing charges.

Here are Kevin’s own words about the incident in the National Review.

I’ve written about cell phone users and rude patrons before. It is time theatres began shaming and ejecting patrons who willingly disregard notices and reminders to silence and not use their phones during a performance, as well as those who take flash pictures.  We don’t allow children to play with toys during a show, so why are we letting adults?

UPDATE 5/17/13: To clarify, I don’t mean tar and feathering cell phone abusers.  Ejecting an audience member who is willfully ignoring rules to not use their cell phone should serve to shame the offender and offer an example of a consequence to others doing the same.  The majority of the audience is there to see the show.  We owe it to them to remove distractions.  A cell phone in use in the house during a show is a distraction.  Remove the offender, and the rest of the audience will thank you.

While throwing another person’s cell phone certainly does not rise to the level of “hero,” it cannot be surprising that someone eventually did it.  We cannot continue to coddle those who can’t go 30 seconds without staring into their electronic leash at the expense of the majority of our patrons.  A cell phone ring or lit screen is FULLY PREVENTABLE.  It is not the same as coughing, sneezing, or even a bad whisper.  Theatre, and nights out, existed long before cell phones, so it is not necessary to make accommodations for them now.  We’re asking them to turn off their phone (which none of them had 20 years ago) for the duration of the performance, not cut out their tongue.  This should not be an issue.

← Some reminders and requests
Living the Dream: Making your parents proud. →